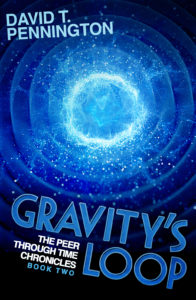 Northern California, 1966.
Dr. Sam Westmoreland never believed his mother’s tall tales of time travel. His concern for her mental health motivated him to study psychiatry. When Sam discovers his boss is conducting mind-control experiments on their patients, he’s taken prisoner. Alone in an isolation chamber, Sam believes he’s hallucinating when the ground opens and he is transported through time.

Californialand, 2109.
Vittie Westmoreland, genetically enhanced since before birth, is learning to control the time portal her family stumbled upon long ago. As an experiment, she pulls her ancestor Sam into the present.

Sam wants to get back to the asylum to ensure the safety of his patients, but he’s trapped in a world of shapeshifting buildings, AI governments, superhuman freaks, and a Golden state that has declared itself a nation. He meets a younger, pregnant version of his mother, who’s desperate to return to her own time. Long-kept family secrets are revealed as Sam and his mom race against Vittie for control over the portal, and potentially over time itself.